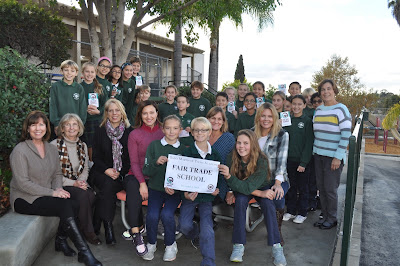 La Mesa, California December 1, 2015 – St. Martin of Tours Academy, part of a national initiative by Fair Trade Campaigns to engage K – 12 students in issues of global poverty, is proud to announce its official designation as a Fair Trade School.  Fair Trade is an economic system that ensures consumers the products they buy were grown, harvested, crafted and traded in ways that improve lives and protect the environment. Fair Trade Campaigns officially recognizes schools in the US committed to educating students about the issues of Fair Trade and sourcing Fair Trade products, like coffee, tea and bananas in the cafeteria, offices and at events.

“There are few things more exciting than seeing today’s youth come to understand the role that they can play as consumers in making the world a more fair and just place. To see them become not just conscious consumers, but advocates for Fair Trade, should challenge all of us to do the same.”  Billy Linstead Goldsmith, National Coordinator, Fair Trade Campaigns

To join or support St. Martin of Tours Academy visit us online at
http://fairtradecampaigns.org/campaign/st-martin-of-tours-academy/

Posted by Fair Trade San Diego at 7:39 AM No comments:

1. A local Fair Trade Steering Committee is formed that meets on a regular basis. The aim of the committee is to increase awareness of and demand for Fair Trade products, through education, outreach and events. - ACCOMPLISHED!

2. A range of Fair Trade products is available in local stores, cafés and other venues. ACCOMPLISHED!

3. Fair Trade products are used by a number of local organizations, such as places of worship, schools, service organizations, hospitals and offices. ACCOMPLISHED!

5. The town / city official signs a commendation supporting the concept of Fair Trade and the local campaign. ACCOMPLISHED!